CAES Zuidwending, the first large-scale electricity storage facility in the Netherlands located at Zuidwending in the province of Groningen, is being developed by Corre Energy Storage BV.

The project’s designation as a European Project of Common Interest confirms its status as one of Europe’s most important energy infrastructure projects.

This highly innovative project will allow a new, 100% renewable large-scale energy storage technology to be replicated across Europe and worldwide.

CAES Zuidwending will place The Netherlands and the Province of Groningen at the forefront of the energy transition.

Corre Energy is proud to announce an investment partnership with Infracapital, the infrastructure equity investment arm of M&G plc for the CAES Zuidwending project (PCI 1.17). 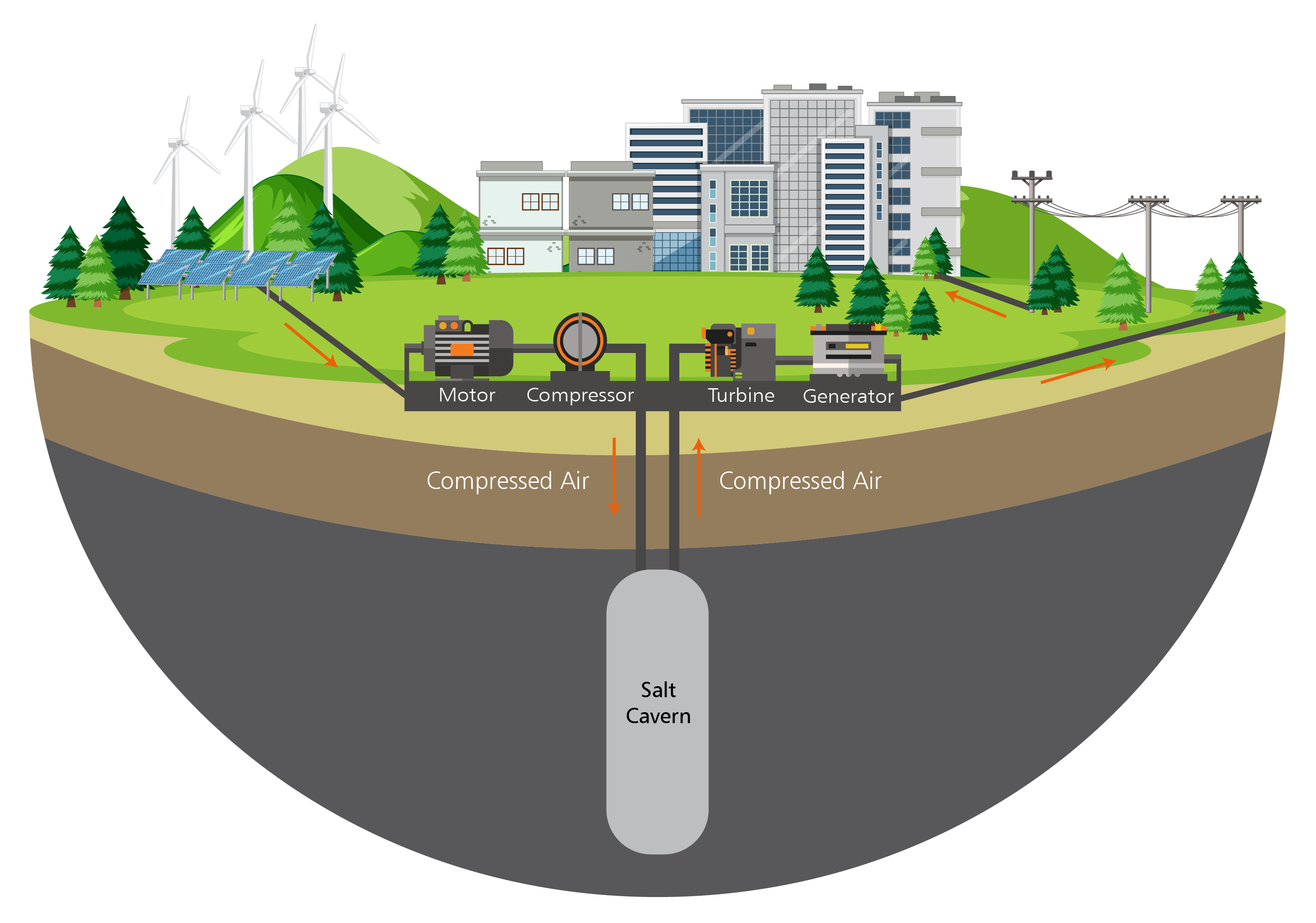 CAES is a highly flexible large scale energy storage technology, operating reliably and safely since 1978 in Germany and 1991 in the US. The technology uses purposefully designed underground storage caverns created in geological salt deposits by a process known as solution mining or leaching.

During operation of the CAES facility, in the storage phase, electricity is used to compress air into the storage cavern. In the generation phase, the compressed air is released and heated to drive turbines, producing electricity when required.

Recent turbine technology developments allow addition of up to 50% hydrogen in the fuel mix for CAES in the generation phase.

Need for the project

Corre Energy Storage BV is developing CAES Zuidwending in the context of the Paris Agreement and The Netherlands Climate Act and the National Climate Agreement 2018, which set a national target for 70% renewable energy by 2030, comprising 11.5 GW of offshore wind, an additional 7 GW of onshore wind and up to 6-8 GW of solar.

Other northern European countries have acknowledged that climate change must be addressed as an emergency issue and are increasing their renewable energy targets.

Offshore wind across Northern Europe is set to reach approximately 70 GW by 2030.

The project will provide access to energy storage for renewable energy producers and essential services to the Transmission System Operator, TenneT, to ensure the secure operation of the electricity grid.

During construction and operation the project will provide multiple benefits at local, national and EU-wide levels including:

Projects of common interest (PCIs) are key infrastructure projects that are intended to help the EU achieve its energy policy and climate objectives: affordable, secure and sustainable energy for all citizens, and the long-term decarbonisation of the economy in accordance with the Paris Agreement. The goal is to help countries within the EU to achieve their energy policies and climate objectives.

Corre Energy’s strive to achieve decarbonisation through the introduction of mass renewable energy, coupled with our aim to provide affordable, sustainable energy for citizens is why we have been designated as a PCI by the European Commission.

CAES Zuidwending is included as project 1.17 on the 3rd list of PCIs within the North Seas Offshore Group priority corridor.

Further information on European projects of common interest can be found at Europa.eu

Status of the Project

Details of the project’s progress will be updated regularly at this website.

The permitting process for PCIs is governed by the national competent authority in the relevant Member State, which for the Netherlands is the Ministry of Economic Affairs and Climate Policy (EZK).

The Ministry’s website is www.government.nl and its guidance for the permitting process for PCIs is available here and here (English).

The permitting process will involve a thorough program of environmental and technical assessment and will include a comprehensive public consultation process, in line with Netherlands and EU legislation.

"Energy is undoubtedly one of the most critical industries, with innovative technological advancements being absolutely vital to keep up with environmental change and industry demands."

TOP
We use cookies on our website to give you the most relevant experience by remembering your preferences and repeat visits. By clicking “Accept”, you consent to the use of ALL the cookies.
Cookie settingsACCEPT Read More
Manage consent

Performance cookies are used to understand and analyze the key performance indexes of the website which helps in delivering a better user experience for the visitors.

Analytical cookies are used to understand how visitors interact with the website. These cookies help provide information on metrics the number of visitors, bounce rate, traffic source, etc.

Advertisement cookies are used to provide visitors with relevant ads and marketing campaigns. These cookies track visitors across websites and collect information to provide customized ads.

Other uncategorized cookies are those that are being analyzed and have not been classified into a category as yet.

Save & Accept
Powered by